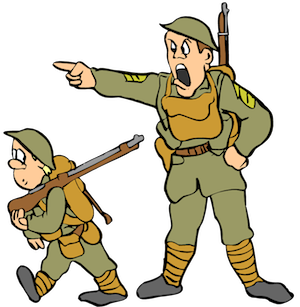 Most people do, I think, and maybe that’s just part of the way our society has developed over the last hundred years or so. Orders and commands have their places, but those are places I’ve agreed to, mainly at work, and sometimes training in the dojo.

I’ve consented to the job I’m in, the boss I have, the place I work. If I ever choose to withdraw that consent, then I have the free will to look for a new job, either on my own or after my boss expresses their free will by withdrawing their consent to continue paying me.

But outside of the consent I’ve given, I don’t like being told what to do, especially when someone is trying to tell me what to think or how to act. I haven’t consented to that. And I won’t.

Ask me a question that makes me think, however, and not only will I think, I’ll be happy about it. Follow that question with other questions and reasoned propositions and we can probably have an interesting discussion that may or may not end with one or both of us modifying our opinion on something.

But tell me what to think, what to do, what to believe, and the best result you can hope for is that I mentally dismiss you as an idiot and walk away. Best result, mind you.

This might be a big part of why a lot of ideologies and religions are dying. They demand adherents adhere not because of convincing arguments or reasoned explanations, but merely because they demand it. You don’t get to question or discuss, just do/think/believe such-and-such because you’re told to.

Not really a winning hearts and minds kind of strategy, is it?

Blind obedience is quickly becoming not a thing, which just makes the ones who want it demand it even louder, maybe because they know they never deserved it in the first place and they’re afraid we’ve realized that.