If I seem to be posting a lot of book reviews right now, I sort of am. The end of the year got very busy for me with a new job and my reviews suffered, mostly consisting of a few lines of notes that haven’t been blown out into actual reviews. Trying to fix that. Also posting them to more than just Goodreads. 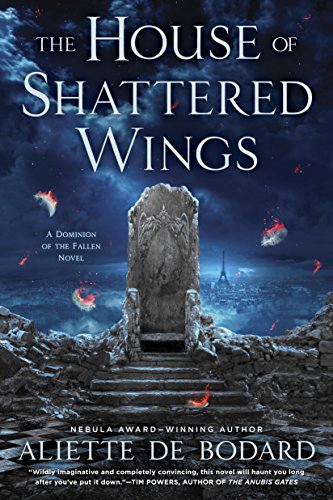 In The House of Shattered Wings, the author presents a bit of a mixing of mythologies, with Christian being the heavy presence that slams down everything else. I wonder if that’s supposed to tell me something about Christian Hegemony in Western society, but whether or not that’s the case, it does make the atmosphere of the book rather oppressive for me.

Sixty years after a knock down drag out magical war, the Fallen Angels have all the power in what’s left of Paris. Apparently, they have all the power in what’s left of civilization, or Western civilization, at least. This leaves a bad mental taste for me for reasons that are hard to articulate. Even recognizing Christianity as the dominant (and you can say only for most of the last thousand years) religion in Europe, it warps the Christian mythos so that the Fallen are cast out of heaven to land on earth instead of being sent to hell. And one at a time. An angel loses a little faith or rebels and, oh well, you’re humanity’s problem now, screw the planet. So much for being god’s children.

But I did say there was a little mixing going on here. The book doesn’t leave out that there are other mythologies and it does theoretically give them equal weight, just not in the setting we’re in. The primary character is a banished immortal from a different mythology, and even he is depressed that the Christian mythos is so much more powerful than everything else that it’s tromped all over the whole world. This, I think, is meant to be allegorical rather than propaganda.

And there is exactly one likable character in this book (and she dies, sorry). The primary protagonist (and it’s hard for me to use that word) is amoral at best, doing whatever it takes to survive and screw everyone else. That one likable character guilts him into a couple of things because he does still feel bad enough about some of his actions when his nose is rolled into it.

For me, even the antagonist isn’t someone I love to hate, but rather who sickens me. And that describes most of the cast, really. Amoral at best, but mostly immoral or outright evil.

This doesn’t read like the first book in a series. I don’t mind being thrown into deep water and expected to learn out to swim, but, to push the analogy too far, it’s dark, stormy, and there are three-metre high waves. When we start the narrative, there are apparently sixty years of backstory, including some major characters, that we just get tiny fragments of. I get that the characters just take their world as a given but, as a reader seeing through their eyes in a world that’s an extension of the one I live in, there needs to be some explanation of how we got to the post-apocalyptic, dystopic, magic-suffused future the story is set in.

But maybe that’s my problem. I’m not a big fan of dark fiction or dystopian fiction. This is both. But I also want to like at least some of the characters I’m reading about, and in this book, I can’t.

Overall rating: 1.5 stars. I think the only reason I managed to finish the book is because I was doing the audio version during commutes and I listen to audio narration at double normal speed. I loved every one of Ms. de Bodard’s science fiction stories I’ve read, and I’ve heard good things about her other work, including this, but this book didn’t work for me on just about every level. I’ll be skipping the rest of the series.